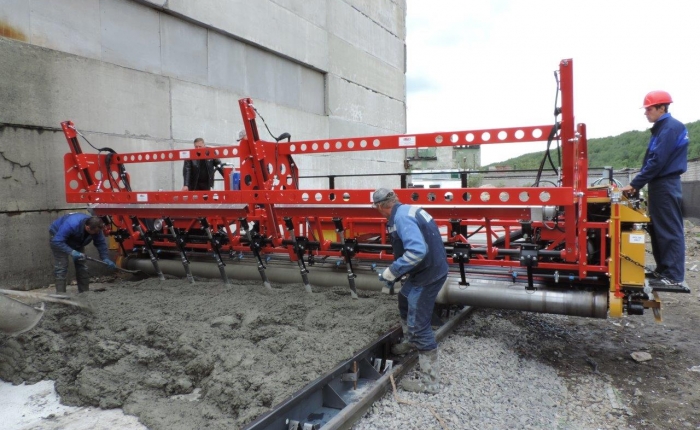 The paver was purchased for laying of concrete roads in the facility near Murmansk. The order was placed in the end of April 2013 and it has been delivered to the Customer's site in Murmansk 10th July 2013. The machine supplied including assembly on the site, operational and service training. The training was done as follows:

- Unloading machines from the container;

- Assembly of the vibration section;

- Preparation of a demonstration site - a site of 6x6 meters, limited by riding forms and filled with sand;

- Putting the machine on the forms;

- Setting up forms for test pour;

- Putting the machine on the forms;

- Laying concrete on the test area;

Concrete pour has been made in the area of ​​about 5x30 meters. Used concrete in three different kinds which planned to be used on the real object.

NO FINSHING of concrete surface has been done (smoothing / edges / finishing / texturing / impregnation).

- The equipment was delivered on time;

- The customer received equipment assembled on his site;

- Training in theory and practice has been performed;

- The result on the test slab fully meets the customer's requirements.